Read the article in spanish here.

Julia Herrero holds a Ph.D. in Physical Sciences from the University of Zaragoza, where she is a researcher and professor. She has also taught at CUD Madrid and abroad in Berlin and Cambridge, and is the vice-president of the Division of Physics of Condensed Matter of the Royal Spanish Physics Society (GEFES). Herrero has devoted most of her research career to magnets, especially those with novel nanoscale properties, and studies of the solar system through magnetic meteorites. Recently, she has been focusing on outreach and women’s initiatives in science, such as 11 de Febrero. In April 2018, she received the Medal of the Cortes de Aragón on behalf of the Aragonese women scientists and the 11F.

In this post, we will focus on her experience as a scientist, and soon, there will be a second part regarding women in science.

What made you become interested and dedicated to physics?

Like other children, I looked around and wondered what things are and why. I had an absolute fascination with the moon and the stars. From a very young age, my father took me to see the eclipses. It was something that excited me. I asked home and my father, who was a physicist, explained it to me. Apart from my parents (my mother was a mathematician), the one that pushed me was my senior science teacher. She was a magnificent teacher: Amparo Corullón. She explained the subject so enthusiastically that it made me re-discover physics and study it as my degree.

To expand more upon her study, Julia Herrero provided a video explaining what condensed matter is.

From your personal experience, what is the situation of women in the scientific field, and why is that?

The scientific field is vast, and there are many different areas. The situation isn’t the same in the health field as in engineering or physics. Neither is it in physics and chemistry, despite being close careers. We like to talk a lot about the women pioneers who broke barriers and started building science. Although things have widely changed since then, we are still a minority in some disciplines, especially in physics and in some engineering, not so much in medicine or chemistry. Nevertheless, above all, there are still few women in high positions. This is explained not only because women have joined science later, but because of other factors. Firstly, motherhood. Although more men are involved in parenting, it still demands women to be highly dedicated. The care of the elderly is also a similar case. Adding on, there are many unconscious biases when evaluating resumes, making it difficult for women to be promoted. There are still many stereotypes that make few girls start or enter some careers.

Although things have widely changed since then [the pioneers], we are still a minority.

Have you noticed differences in promoting and valuing science, especially the role of women in different countries where you have worked?

I have worked in 4 countries: in Spain, in the United States, in England, and Germany. I was only six months in Iowa, USA, and in a small city, so perhaps I didn’t get to see the situation of science in that society. In England, I was at Cambridge University, which had fantastic programs for scientific dissemination. Neither of them did I feel significant differences with Spain in the role of women in the scientific field. At least from my point of view at the time, which might have been naive. In Germany, I worked in a laboratory with very few women. Besides, those few abandoned the scientific career to be mothers. The social and family pressure for women to dedicate themselves full time to their children is firm. Consequently, there are very few women, and those have to fight very hard. They often meet very high barriers due to being women. Moreover, even though one might think that in Germany, where the head of state is a quantum chemist, it would be different. 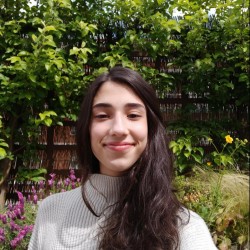 “I was taught that the way of progress was neither swift nor easy,” said...
Shining Stars

Enthusiast about bats and monkeys, MSc. Lucía Sánchez is an outstanding conservation biologist. Her...